Our MD, Tony Fillingham, was recently approached by Mr and Mrs Fell who own a farm in Keasden, North Yorkshire, with an interesting proposal, "What can you do with our Bog Oak?"

"..that has been buried in peat bogs and preserved from decay by the acidic and anaerobic bog conditions, sometimes for hundreds or even thousands of years. The wood is usually stained brown by tannins dissolved in the acidic water. Bog-wood represents the early stages in the fossilisation of wood, with further stages ultimately forming lignite and coal over a period of many millions of years." 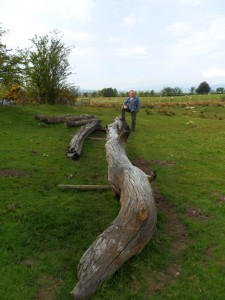 The bog oak at Keasden farm was hauled out by a tractor 20 years ago and had been left lying on the surface ever since.

Owners, Mr and Mrs Fell, had friends stay with them late last year, one of them being Dr. Donald A. McFarlane, Professor of Biology, from Scripps College in California, who noticed a piece of the Bog Oak was used as their mantelpiece above the fireplace. Dr McFarlane offered to take some specimens back to the USA for radiocarbon dating to establish the age of the Bog Oak.

The results from the radiocarbon process date the specimens as 4000 BC - 3950 BC, that’s almost 6,000 years old! Download official results of radiocarbon age.

Now that Tony was aware of what he was dealing with, he’d taken a few pieces back to the British Hardwoods’ factory to moisture test and understand its working properties and soon realised it would be challenging to work with. The wood easily fell apart and when attempting to machine it, sparks were flying off the cutters and blunting them rapidly, all due to the fact that the oak is carbonised (from the bog process), which was like working with coal. 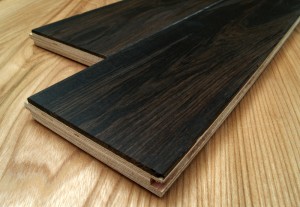 Close up of tongue and groove of Engineered 'Bog Oak' Flooring

Determined to save the quality of the oak for potential further processing, Tony decided to use British Hardwoods’ Engineered Flooring technology to create an exceptionally unique floor.

The main Bog Oak log supplied was 9m long and approximately 600mm in diameter, with a few extra smaller pieces. This would allow the main log to be made into random width flooring for maximum timber usage at 5mm thick and 2.4m long bonded on top of 15mm thick birch plywood. The dark filling for the open knots and splits was specially created to perfectly blend with the natural colour of the oak.

The outcome, a structurally sound and stable Bog Oak flooring, with its aesthetic features of ‘imperfect’ appearance and rich black with touches of golden brown colours being preserved. 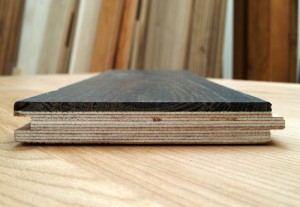 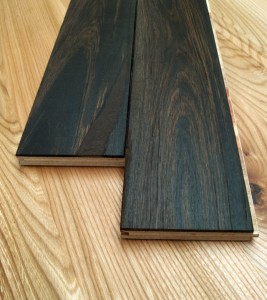 As the Bog Oak is not influenced by standard weather conditions or pests that usually undermine the quality and appearance of wood, the flooring can truly be admired in its preserved condition and fascinating age, reviving the spirit of the past times.

We believe a project like this has never been undertaken in the UK, and we’re extremely proud to have been given the opportunity to create an engineered floor using rare oak dated in the 4th millennium BC.

Please Note: The bog oak manufacturing process described in this blog, was a special, one-off undertaking, using our customer's own timber. Due to the rarity of the timber, we are unable to take orders for bog oak flooring.